San Cristobal's community wood processor was made possible with a grant from LOR // Photo by J.R. Logan

The work, quite literally, keeps piling up in San Cristobal, a New Mexican village about 20 miles north of Taos. Hundreds of cords of unseasoned piñon and juniper are stacking up as result of an effort to thin the surrounding Carson National Forest—work that is essential to the wellbeing of the landscape and the 260 people who call San Cristobal home.

Residents here know that forest thinning is essential to staving off wildland blazes like the Hondo Fire, which ignited in San Cristobal in 1996 and tore through more than 10,000 acres, ultimately destroying 27 buildings in a neighboring village. In the quarter-century since, fire risk—and the ensuing threat to the region’s ecological balance and watershed—has only grown.

That’s part of the reason generations of leñeros (local wood gatherers) work to thin forests. In 2018, the Cerro Negro Forest Council began recruiting them with specific goals in mind—like the 300 acres in the nearby Carson National Forest. Leñeros haul their harvests out of the forest and sell it to community partners, who will resell it as firewood once it’s been split and dried, a process that can take months.

“To me, the most important resources are water and wood,” says Dickie Córdova, a leñero and fifth-generation San Cristobal resident. “I can’t live without either.”

Until recently, though, the community had few ways to split and store the raw wood, limiting the speed with which leñeros can harvest and sell the wood. The addition of a portable 14-horsepower Hud-Son firewood processor is changing that.

This past summer, the San Cristobal Neighborhood Association outlined the benefit of a processor in conversations with LOR’s Taos program officer Jake Caldwell. Within two weeks of Caldwell’s initial conversations with residents, LOR had funded a grant that made it possible to purchase the $9,595 machine. Soon after, the neighborhood association, in partnership with the Cerro Negro Forest Council, began making plans to create a centralized woodlot in which the firewood processor would be the centerpiece.

Caldwell understands that working quickly to clear bottlenecks like this is critical. “When a community knows how it wants to tackle big problems and has the know-how to do it, momentum is huge,” he says. “And this wood processor will build momentum.”

The new woodlot should solve a multi-dimensional issue: Leñeros will be able to sell green wood to the woodlot for cash; the forest council will split and store that wood; and—once it’s seasoned several months later—the council will sell the firewood at competitive rates. The neighborhood association will invest a portion of those proceeds in community programs like after-school tutoring for students. The revenue also will help the forest council purchase more wood from leñeros. The operation will, in effect, evolve into a micro-restoration industry in San Cristobal.

"When a community knows how it wants to tackle big problems and has the know-how to do it, momentum is huge. And this wood processor will build momentum." 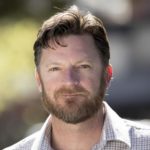 “It was born out of necessity,” says J.R. Logan, president of the San Cristobal Neighborhood Association and one of the project’s leaders. “Piñon is notoriously hard to split. The idea of a small wood processor is to test whether it adds enough efficiency to take the raw wood that we’re cutting and turn it into something you could sell as firewood and be profitable.”

In the coming months, the forest council and neighborhood association will look for a permanent location to split and store cords of unseasoned wood (landowners open to donating vacant land for this purpose can contact Caldwell). At the same time, the council will accept orders from the community for firewood—and, if all goes well, those will be delivered to residents before the winter months arrive a year from now, yielding a profit that can be invested back into the village.

“It’s the right scale for what we’re doing,” Logan says. “It is the little catalyst that could create a much bigger change.”